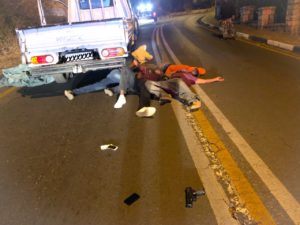 On 31 August 2018, guards noticed suspicious activities at a neighbouring property in Houghton. They requested assistance and tactical units responded and started chasing the suspicious persons on foot and in a white Hyundai up Munro Drive out of Houghton.

Within three minutes five persons were apprehended and a firearm was discovered. Suspects were handed over to SAPS.

The victims remain traumatized after the suspects tied them up and beat them while they were on the property.

Suspects are possibly linked to other cases.