The man is using a fake City Power’s contractor Acumen Software and does not do any field work. 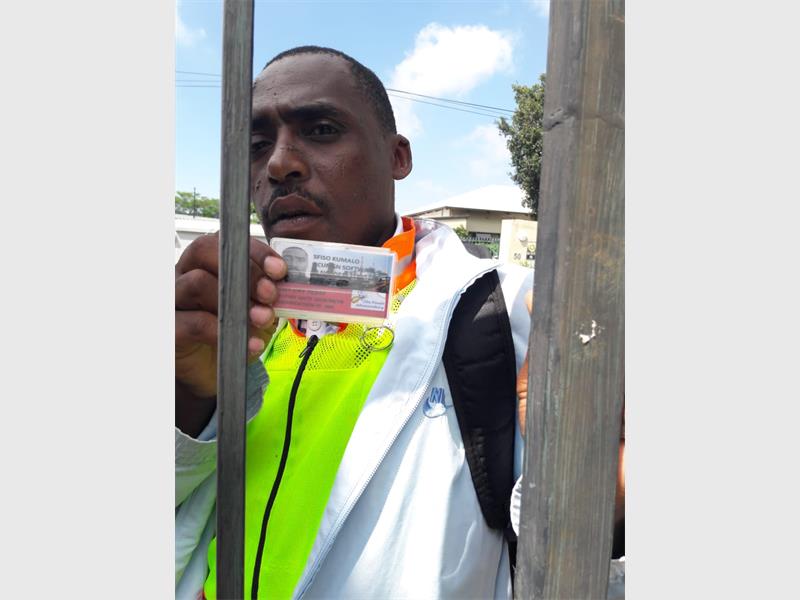 Residents of Johannesburg are warned about a man going around the suburbs pretending to be a City Power smart meter reader. The man is carrying a fake card not registered with the entity or its contractors. Photo: Supplied

A man walking around the Johannesburg north-eastern suburbs pretending to be a City Power smart meter reader has been exposed and residents are warned not to let him onto their properties.

A property owner in Sydenham, who wishes to remain anonymous, contacted North Eastern Tribune and said that a man (pictured) visited his house and pretended to be an employee of the City of Johannesburg’s power utility, City Power.

The man is said to have come to their house claiming that their new smart meter was not working properly and his team needed to come and change it.

“He was carrying an office-looking clipboard and also wearing a yellow safety vest which was under his tracksuit,” said a resident adding that the man had a City Power identity card.

“We first let him in, but his knowledge of the smart meter seemed to be wrong. When he came back the second time we took a photo of his ID and then he was a bit hesitant to come in. He left saying he would come back later.”

The resident then used SMS ID verification service (38021) to check the man’s identity number. Anyone can use this service to verify an ID number and they will then receive an SMS with the person’s verified details. “In this case we got back a message saying ‘invalid ID number’,” he said.

City Power’s spokesperson, Isaac Mangena, confirmed that they’re aware of this case and are investigating it through the City’s Group Forensic Investigative Services (GFIS).

Mangena said the suspect is an imposter who allegeldy robs residents by claiming that he is a City Power employee. According to him, in a recent incident, the man presented himself to a customer as a ‘meter reader’ with a (fake) City Power card which showed the name of Sifiso Khumalo. The imposter then allegedly assaulted the customer before stealing her son’s car and housing equipment which included computers, jewellery and a cell phone.

“The person in the picture is neither a City Power employee nor a contractor at City Power and the card he is holding is a fake card,” City Power said in a statement on 26 February.

“City Power would like to assure residents that the name Acumen Software that appears on the card is a company of good reputation. It has no relations with criminal activities of the person appearing in the picture.”

According to the statement, they have referred this matter to the GFIS ‘for further investigations and to bring this perpetrator to book’.

City Power is also warning residents not to allow any person, technician or contractor onto their property without first verifying credentials with City Power’s Security Risk Control Unit on 011 490 7911 or 011 490 7553 or 011 490 7900 or by contacting the Metering Call Centre number at 011 490 7484 and they also advise residents to contact their nearest police station.