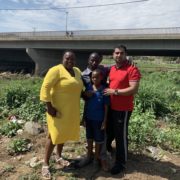 Vincent Cosa is being hailed a hero after he risked his life to rescue a child from the Jukskei River.

In a video clip shared by Yusuf Abramjee, the child is seen atop a pole that stretches across the river. The man slowly makes his way toward the child and later carried him to safety as onlookers cheered.

This man needs a medal for bravery: he rescued a child in Alexandra JHB (Jukskei River). WATCH pic.twitter.com/kxSebpZoj9

With the help of the MEC @NkosiMalobane we tracked down Vincent Cosa in Alex. He is the man who saved a child from the flooding Jukskei River. We met with the young boy & Vincent this morning to honor him for his bravery! @GP_CommSafety pic.twitter.com/pbL3k4rLco

Two trains collided at the Elandsfontein train station in Boksburg.
Scroll to top