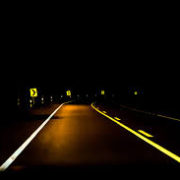 With the April long weekend approaching, some motorists will try to avoid holiday traffic congestion by driving at night.

According to the Automobile Association, statistics show that night time driving may be three times more dangerous than driving during the day because of additional risk factors such as poor visibility, drunken pedestrians, animals on the road, tiredness and lack of concentration.

“Drive at a Safe speed – the speed limit may not be a safe speed. Be Proactive – Pay attention to heavy traffic in the distance.”

Theba says that weaving in and out of lanes trying to find the fastest-moving lane won’t save you much time and only increases the risk of road crashes.

“By slowing down, you can avoid potential collisions with jittery drivers who just don’t have the patience to deal with traffic delays. Follow the general flow of traffic – driving too slow can make other drivers around you impatient, agitated and lead to dangerous driving situations.”

Theba adds that motorists should follow the general flow of traffic and that driving too slow can make other drivers around you impatient, agitated and lead to dangerous driving situations

Motorists have also been advised to be extra cautious maintaining a safe following distance especially when driving at night.