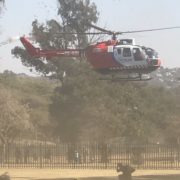 The Civilian Crime Intelligence Network (CCIN) held its conference in Johannesburg at the Military Museum in Saxonwold on Saturday.

Various role players and stakeholders in the public safety sphere were in attendance at the event which featured demonstrations and stunts by ER24 and the Johannesburg Metro Police Department respectively.

MMC for Public Safety in Johannesburg Michael Sun says the Johannesburg Metro Police Department (JMPD) is working directly with Mayor Herman Mashaba and have decided to share monthly (JMPD) crime stats instead of the annual ones as this is in a bid to create more awareness and to monitor progress.

Watch a demonstration by ‘Vision Tactical Medical Partners’ ER24 enacting how a gunshot victim is transported to the hospital with a chopper:

VTAC Members attend the Conference in JHB with other key stakeholders on the public safety spectrum. #SaferSA 🇿🇦 pic.twitter.com/DOSRum9bhp

New Vehicle Pound In Joburg On The Cards, Set To Hold 10 000 Vehicles
Scroll to top