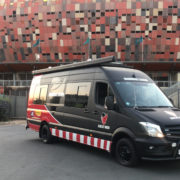 The vehicle will be deployed in the Johannesburg area to better handle emergency and crisis situations.

Director Yaseen Theba says the unit will be used to proactively support the fight against crime in Johannesburg.

“The vehicle will be used for emergency operations as a command post and a communications center, further enhancing strategic partnerships with various stakeholders.”

Theba affirmed that law enforcement will have access to the vehicle including the South African Police Service and Metro Police Departments when attending crime scenes.”

According to Theba, the Mobile Command Centre will be dispatched to any emergency situation and can be utilized as a meeting area, radio command post, WIFI hub with various communication capabilities, and much more.

“Some of the features incorporated into the Mobile Command Centre include vehicle tracking software and hardware to assist our strategic partners Tracker Connect.”

Medical equipment and facilities including scene lights, restrooms, workstations, portable lighting, easy roof access and safe storage are just some of the additions that the vehicle carries.

The multipurpose seating area is designed to accommodate trauma counselling and recording of victim’s statements following an incident.

Theba says that the idea behind the Mobile Command Centre is to ensure that other Vision Tactical Units including the Intervention Unit, SWAT Unit, Patrol Vehicles and Houghton based control room become more efficient in proactively fighting against crime and criminals operating in the city.

The vehicle is a fully fledged C4ISR (Command, Control, Communications, Computer, Intelligence, Surveillance, and Reconnaissance) unit, a first for the private security industry.

C4ISR will ultimately increase situational awareness, giving the operational team the information they need as fast as possible, by using the right materials, equipment, and systems to make that happen.

Journalists wanting to join in on a ride along can contact: