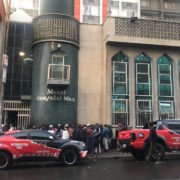 Following an intense week of unrest in Johannesburg, thousands of protesters took  to the streets yet again on Sunday, looting shops in Johannesburgs CBD, Hillbrow, Maboneng and Jeppestown.

In the line of fire was Masjid Himayatul Islam, situated in Nugget Street, reports emerged that a petrol bomb was hurled at the gate of the place of worship just before the sunset prayers, fortunately no one was hurt.

At this stage it’s unclear whether the Mosque was targeted by protestors or not.

Two suspects were apprehended by private security company FASDA and have been taken to the Johannesburg Central Police Station.

Police officers have been deployed in areas affected by the protests.