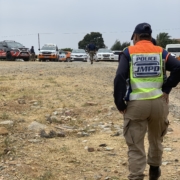 #FallenHeroes Honoured and Remembered in Johannesburg