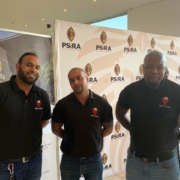 The Private Security Industry Bravery and Crime Prevention Awards in conjunction with SASA, SANSEA, TAPSOSA and supported by PSiRA took place at the Gallagher Convention Centre in Midrand on Tuesday night.

The Awards ceremony recognized those individuals who went beyond the call of duty to make a difference in the prevention of crime.

In attendance were key industry organisations, private security companies and various dignitaries from government including the Ministry of Police, PSIRA and SAPS.

Three Vision Tactical Officers received the prestigious Private Security Industry Bravery Awards in the category of ”Going Above and Beyond the Call of Duty”;

The keynote address was delivered by Deputy Minister of Police Honourable Cassel Mathale.

“We are here tonight to express our appreciation for the work that each and every security officer is doing.”

Director of Vision Tactical Yaseen Theba says that the award is testament to the tremendous efforts and sacrifices made by the officers in the line of duty.

“We would like to commend each and every officer in the team for continually going above and beyond the call of duty to keep our communities safe, receiving these prestigious awards proves that what we are doing does not go unnoticed.”

“The Regulator will also be expanding, making it easier for individuals in the security industry to access services in various locations”.