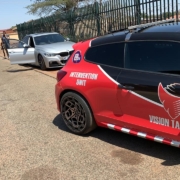 An armed robbery incident occurred at the Kingsley Depot in Laudium on Monday morning.

It’s believed that six armed suspects entered the premises, robbed employees and fled the scene with two cell phones and the owner’s BMW.

Private Security Company Vision Tactical dispatched its Intervention Unit to the scene immediately upon notification and arrived on scene within 3 minutes.

Vision Tactical’s Intervention Units on scene together with @SAPoliceService after recovering a stolen BMW 3 series which was taken in an armed robbery committed by 6 armed suspects in Laudium, Pretoria.

The vehicle was recovered in Atteridgeville, West of Pretoria. pic.twitter.com/MP9EikCxVY

The company’s Director, Yaseen Theba said that the BMW vehicle stolen in the robbery was successfully recovered in Atteridgeville, however no suspects were apprehended.

“The vehicle’s tracking unit was activated and subsequently recovered by Vision Tactical officers, local police reservists and CPF members in Atteridgeville after it was abandoned by the armed suspects.”

The victim has since opened a case of robbery and theft of a motor vehicle at the Laudium Police Station and the incident is being investigated by local police.

The vehicle was transported to the Pretoria Westpound for safekeeping.