Johannesburg – A 13-year-old boy was taken to hospital in a critical condition after being stabbed nine times in the back for his cellphone.

The boy had been waiting for a bus on the side of Gerrit Maritz Road in Witpoortjie, Roodepoort, after writing an exam on Wednesday.

Five people approached him and tried to grab his cellphone and then stabbed the boy multiple times.

The boy tried to run away but the group followed him.

“He was then stabbed nine times in the back. They didn’t get the cellphone though; it was still on him.”

Van Zyl said the boy was in a critical but stable condition.

He was unable to confirm which school the pupil attended.

“We’re also not 100 percent sure about the circumstances surrounding what happened because he still had the phone on him when he was found.”

ER24 spokesman Russel Meiring said paramedics arrived on the scene just before noon to find the boy lying face down in the middle of the road.

“The boy was surrounded by numerous members of the public. Paramedics assessed the boy, finding him in a critical condition with multiple stab wounds on his back,” he said.

“Once treated, paramedics transported the patient to Leratong Hospital.”

Gauteng police spokesman Captain Tsekiso Mofokeng was unable to confirm the incident at the time of publication.

Van Zyl said crime in the area was on the rise and it was becoming increasingly violent.

He said patrols were being stepped up.

Cape Town – Crime statistics will now be released every quarter, instead of annually, Minister in the Presidency Jeff Radebe said on Thursday.

It would allow government to respond to crime trends more rapidly and contribute to the national development plan’s aim to build safer communities.

The annual report would accommodate changes to quarterly statistics, due to factors like cases being solved.

“It will enable closer scrutiny of crime trends and ensure that proactive, effective decisions and interventions are made in hotspot areas,” he said. 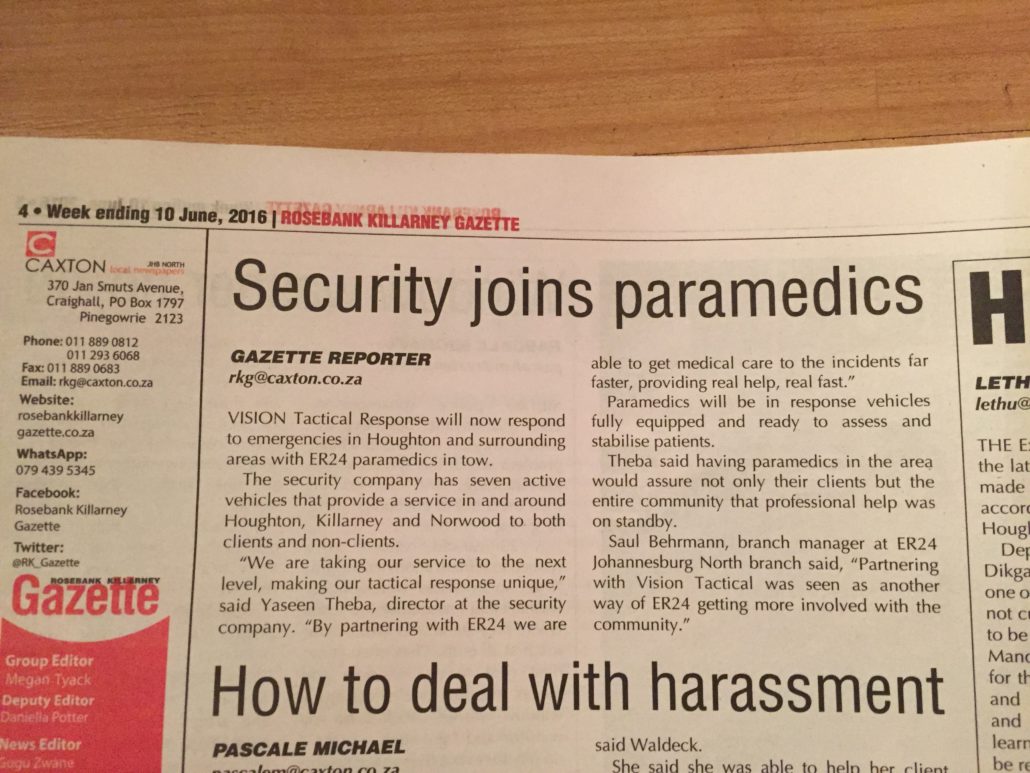 HOUGHTON – Vision Tactical partners with ER24 in the north of Johannesburg. 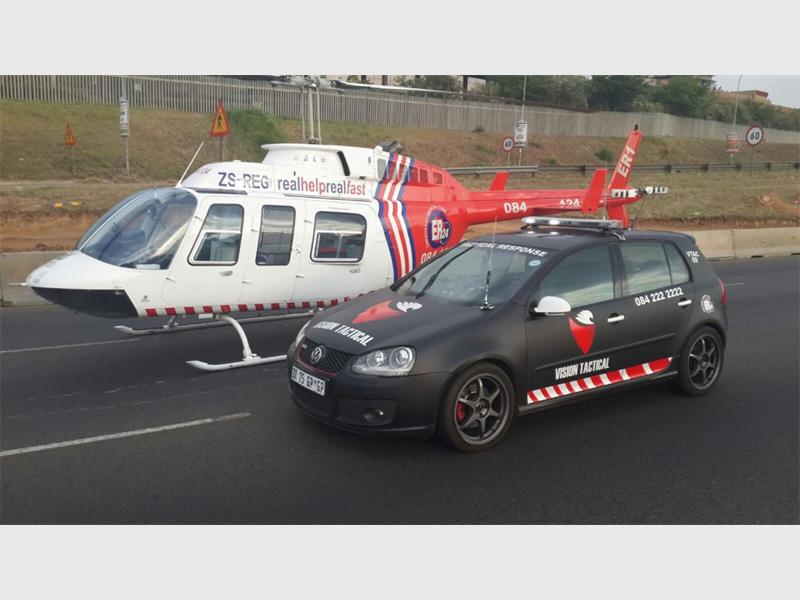 Vision Tactical Response will now respond to emergencies in Houghton and surrounding areas with ER24 paramedics in tow.

The security company has seven active vehicles that provide a service in and around Houghton, Killarney and Norwood to both clients and non-clients.

“We are taking our service to the next level, making our tactical response unique,” said Yaseen Theba, director at the security company. “By partnering with ER24 we are able to get medical care to the incidents far faster, providing real help, real fast.”

Paramedics will be in response vehicles fully equipped and ready to assess and stabilise patients. Theba said having paramedics in the area would assure not only their clients but the entire community that professional help was on standby.

Saul Behrmann, branch manager at ER24 Johannesburg North branch said, “Partnering with Vision Tactical was seen as another way of ER24 getting more involved with the community.”

Both were linked to the house robbery through an identity parade. The men allegedly broke into the home at 9.45am and stole a female victim’s gold ring and other items before escaping in a reported stolen BWM. They were arrested hours later by police who pursued their vehicle after it made a quick U-turn to evade a police checkpoint in Marlboro.

When the police closed in on them, the accused allegedly exited the vehicle but were apprehended as they fled on foot. They were taken back to the car but denied escaping from it. The vehicle was searched and found loaded with jammers, a blue light, police radio, four pistols, three R5 rifles and a glove. DNA tests linked the glove to one of them.

One of them was found to be wanted after escaping from an alleged heist committed with others in Germiston last year. That case was heard by the Joburg High Court and was said to have resulted in some police, private security officers and civilians being killed and injured. Also, he was arrested while on bail for another armed house robbery case committed elsewhere.