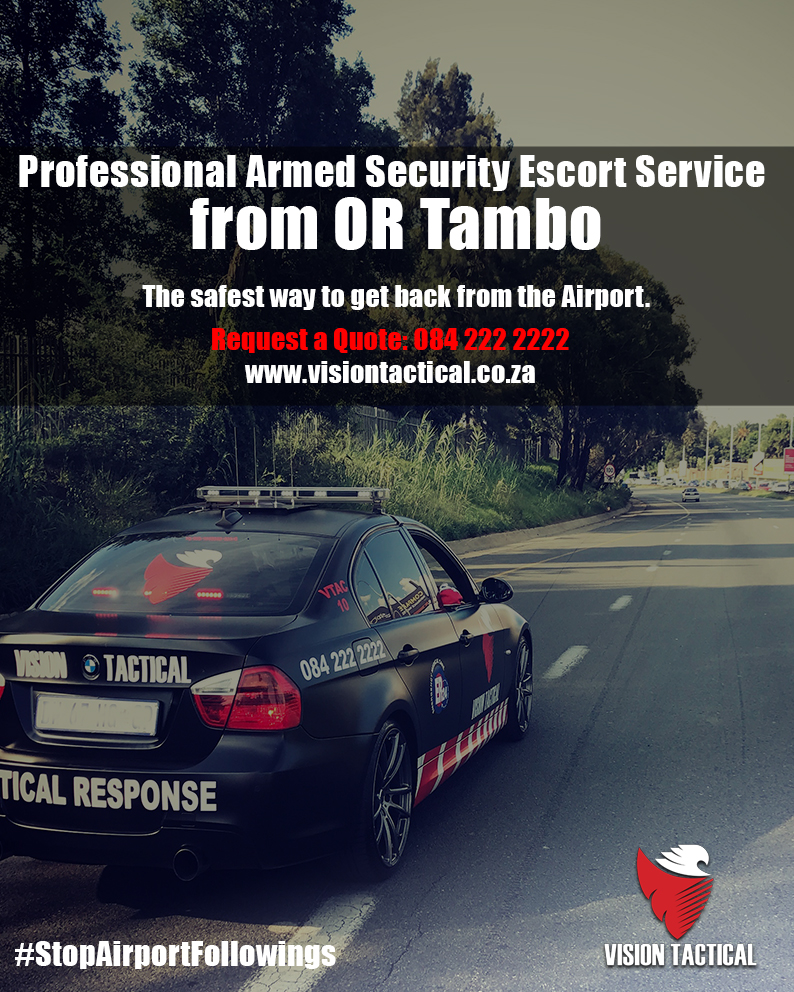 How airport followers target a victim

April 20, 2017/0 Comments/by admin
https://visiontactical.co.za/wp-content/uploads/2017/04/Vision-Tactical2.jpg 514 794 admin http://visiontactical.co.za/wp-content/uploads/2015/08/Vision-Logo1.png admin2017-04-20 10:01:282017-04-20 10:21:25#StopAirportFollowings
Lindi Masinga
Johannesburg – Three men alleged to be involved in the heist at the OR Tambo International Airport in March were granted bail – collectively amounting to R30 000 – by the Kempton Park Magistrate’s Court on Monday.Sibusiso Mnisi, Prince Dube and Thando Sonqishe are facing charges of robbery with aggravating circumstances for their alleged involvement in what is considered one of South Africa’s biggest heists.

Magistrate Amukelani Msineki granted Sibusiso Mnisi R50 000 bail and he has to report four times a week to the Kempton Park police station.

He is not allowed to leave Gauteng until the matter is finalised unless he gets permission by the investigating officer.

Earlier, the magistrate said that Mnisi’s defence council had to prove that there were exceptional circumstances that made him qualify for bail. She said that the state and defence had agreed that the charges he was facing fell under schedule five on the Criminal Procedure Act. Mnisi, 39, made his bail application on March 31. He told the court that he was a maintenance worker and earned R7 000.

In his affidavit Mnisi denied being involved in the heist and that there was no evidence linking him to the crime. He said that his admission statement was made under duress.

Investigating officer Colonel Mabina Mahlangu alleged that Mnisi supplied the cellphones that were used by the suspects to communicate. Mnisi said that he had no previous convictions and the state did not bring forward any information of previous misconduct.

Magistrate Msineki said that there was no reason to suspect that Mnisi had any previous convictions. She said the accused had strong emotional ties in South Africa as his family was based in the country. He has no passport to travel outside the country.

The state did not show this court how the applicant was involved,” Msineki said.

The magistrate granted Prince Dube R150 000 bail including conditions of reporting Monday to Friday and twice on weekends and that he had to surrender all his traveling documents. During judgement, Msineki said that Dube denied being involved in the heist and that there was no evidence linking him to the crime. In his affidavit dube said he earned R400 000 per month.

Later in court the accused said the amount was in fact his annual income.

The investigation officer found that Dube was not a documented citizen and that he was from Zimbabwe.

The accused has four previous convictions of which he only disclosed two. Mahlangu said the accused was most likely to evade trial and commit other crimes.

However, the magistrate said setting strict bail conditions could prevent Dube from evading trial. She said that the state had not given evidence or documents proving that Dube was a Zimbabwean or that he was illegally residing in South Africa.

“The identity number provided was used to find his previous convictions, it was used by SARS to find the various companies he owns.” Msineki said that the state’s case was doubted as Dube was merely linked by an admission statement.

“There’s nothing that links the accused to this case and that he was on the scene on commission of the offence. A SBV uniform was found in his possession, not a SAPS uniform.” Msineki said that the investigation officer said that the money found could be linked to the crime, but there was no evidence directly linking it to the heist.

Due to technical difficulties, the full judgment of Thando Sonqishe could not be read. The magistrate granted Thando Sonqishe bail of R100 000 and he has to report to the Midrand Police Station seven days a week and that he has to notify the investigating officer if he wished to leave the province. Court was adjourned to Tuesday. 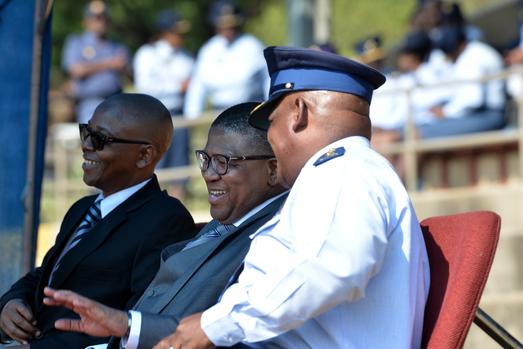 Pretoria – New Minister of Police Fikile Mbalula urged members of the SAPS on Tuesday to fight fire with fire.

The former sport and recreation minister said the relationship between the department and criminals would be like “chalk and cheese”.

“We are not going to be soft on criminals. Police officers must fight fire with fire,” he said.

Mbalula made this promise during a parade to mark his official welcome to the Police Ministry at the SAPS Academy in Pretoria West.

He was accompanied by his deputy Bongani Mkongi.

“When President Jacob Zuma appointed us, he said we must mobilise our people to work with the police to fight and defeat crime,” Mbalula said, adding fighting and beating crime was their mandate.

Mbalula urged communities to work together with the police to fight crime. He also urged the police to be honest and not be on the payroll of criminals. “Minister Gigaba (finance minister Malusi Gigaba), said the police budget must be increased so we can fight crime,” he said.

Mbalula was also critical of the tendency by communities to destroy infrastructure during protests.

He said students and every citizen were allowed to protest, but should not destroy property.

Mkongi called for police officers’ salaries to be increased. “If we want to beat the negative morale of police officers, we must pay them well so they could do their jobs.”

Acting national police commissioner Lieutenant-General Khomotso Phahlane said SAPS members were willing and committed to take guidance and direction from Mbalula in the execution of their work.

Mbalula said he would focus on places like Sunnyside as criminals had captured the city.

He said they planned roadshows to get first-hand experience on challenges faced by police.

Uncle Kathy’s triumph over discrimination & his struggle for peace & equality shall remain his legacy & serve as an inspiration to us all! pic.twitter.com/ATLAtBDucl