A plague of tiny beetles is tearing into trees in Houghton Estate and surrounding areas, killing them at an unprecedented rate.

This has left towns, cities, municipalities and community forums scrambling to find an urgent solution to the crisis.’

Vision Tactical’s Green Team has given its full support to the Lower Houghton Resident’s Association (LHRA) alongside Johannesburg City Parks to try and contain and root out the Polyphagous Shot Hole Borer causing our trees to die.

Green Team Co-Founder Yaseen Theba says that its of utmost importance to get everyone involved in tackling the problem.

“A crucial step is an emergency declaration by the department of environmental affairs so that solutions can be fast-tracked — chemical or biological responses can be implemented speedily and controls tightened.”

Theba adds that if this is not done and an alternative solution not found soon, history shows that shot hole borers are relentless.

The beetle like villain is the 2mm-long, described as an invasive alien species from Asia, the borer burrows deep into trees to create a nest for its eggs.

The first sign that a tree has been invaded is shotgun-like holes on the outside. Dark-red resin then starts to ooze from the holes.

According to research, a single tree can host up to 100 000 beetles.

A number of trees around the Houghton Estate area are now marked with a red notice, as depicted below. 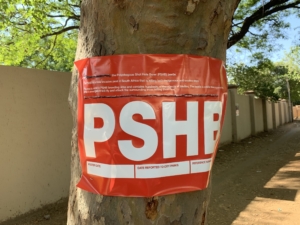 These trees will eventually be chopped and removed from the area due to the infestation of the Polyphagous Shot Hole Borer.

Theba has urged residents to attend the LHRA survey of Lower Houghton’s public trees to determine the extent of the infestation in the suburb.

The survey will be launched at the LHRA AGM in the committee room at the Old Eds Sports Club on 16 October at 6pm.

For more information or media enquiries: