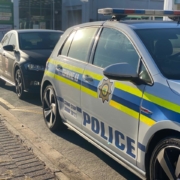 Director of Vision Tactical Yaseen Theba says that the platform encourages a good working relationship with private security companies and law enforcement which is vital especially with the festive period approaching.

“There is a tendency for an increase in crimes during this period, it’s the time of year when criminals take advantage, and this needs to combatted, joining the E2 Project enhances our crime fighting capabilities being in the Private Security Industry.”

Following the launch of this year’s festive season safety campaign by the MEC for Community Safety, Faith Mazibuko, and the SAPS’s Major-General Patricia Rampota, emphasis will be on the E2 project which enforces a stronger operational response to crime hotspot areas.

Theba says that the campaign initiated by the Gauteng Province under “Tight Grip” will be a success as all entities strive to work together with one mandate – making South Africa safer.

The Gauteng Province has collectively developed a provincial joint and intelligence structure operational plan, which will address serious and violent crime, gender-based and domestic violence and femicide, gangs, drugs and human trafficking, contraband and counterfeit goods, road safety and tracing and tracking of wanted and repeat offenders.

Theba adds that Vision Tactical’s Safer Festive Season operational plan is in place together with its partners ER24 and Tracker Connect.

“We believe in building and maintaining strong partnerships and this is evident with ER24 who are experts in their field of Emergency Medical Services as well as Tracker Connect who we work with very closely on a day-to-day basis.”

“We need to be extra vigilant during the festive period as this is a time where we experience a lot of vehicle accidents due to reckless and negligent driving, the focus would largely be on high visibility of members at crime hotspot areas,” Theba said.

These will include heightened visibility at tourist destinations, shopping centres, as well as conducting intelligence driven operations with law enforcement during and post the festive season.