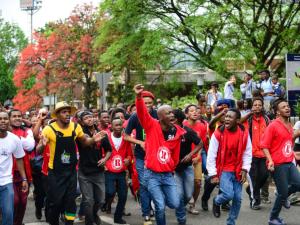 By KATE MORRISSEY AND TEBOGO MONAMA

Johannesburg – Students at Wits University said on Thursday morning that protests sparked by the institution’s announcement that fees were being hiked would continue.

However, university authorities said security had been beefed up at all gates and police had been called in to prevent disruptions of lectures, which were expected to resume.

Angry students shut down the campus on Wednesday and declared its grounds a “no in, no out” zone in protest.

Classes and other academic activities were suspended as a crowd of students moved through lecture halls chanting songs condemning the increase.

They said the hike wouldprevent students who came from lower-income families from accessing higher education.

“This is not a protest – it’s a shutdown,” said Mcebo Dlamini, the former student representative council (SRC) president, addressing hundreds of students in a hall outside the student enrolment centre.

Wits students closed access to all the universitys entrances to object to an increase in fees. Picture: Bhekikhaya Mabaso THE STAR

The students had blocked all entrances and exits.

Nompendulo Mkhatshwa, the president-elect of the SRC, said the management should remember that the institution belonged to the students.

The crowd grew bigger as more students joined in.

The morning had started with fewer than 100 students guarding the gates. The group began winding through buildings on the west side of campus before they burst into lecture halls, singing and stomping as they disrupted lectures.

Some students ignored the procession of demonstrators but others joined in.

By 11.30am, the crowd had swelled to well over 500 people. Some of Wits’s staff also joined in, singing, chanting and dancing their way through the campus.

A woman hoisted a placard with the message “Being poor cost me my future”.

A few of the buildings bore the marks of the protest. One lectern in a hallway had been tagged “Do not submit. Revolt”, and someone had painted “Lynch Habib” on the side of College House. Professor Adam Habib is the vice-chancellor.

University spokesman Shirona Patel said no one was injured.

“Aside from one altercation and the vandalisation of some classes overnight, no violence has been reported,” she said, adding that the protest was illegal as it violated the rules.

“While the university recognises that students have a right to protest, this cannot happen at the expense of the rights of students and staff members to learn and work in a safe environment,” Patel said.

The university is increasing fees by 10.5 percent and registration fees by 6 percent.

Wits isn’t the only institution increasing its fees by double digits. The University of Cape Town is also raising its fees – by 10.3 percent.

Higher Education spokesman Khaye Nkwanyana agreed with the students. “Institutions of higher learning sometimes raise their fees in ways that are exorbitant and serve as an exclusion mechanism for many students. This also means that students who are in the institutions default and are financially excluded,” he said.

The Star and ANA