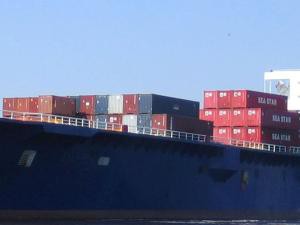 Durban – South African customs officials have seized contraband worth R49 million including drugs, wildlife and counterfeit clothing smuggled through Durban Harbour in the past six months.

The secret weapon in customs’ arsenal is the new, hi-tech cargo container scanner which, through its X-ray capabilities, is able to see what is in containers without the need to open them.

The scanner, which has been used in the Durban Harbour for a year, has revolutionised the way they investigate suspicious containers – because customs officials no longer have to physically open them to see if it contains contraband.

Since April, the SA Revenue Service (Sars) customs officials have made 106 seizures and have confiscated contraband that included alcohol, vehicles and cigarettes.

The biggest seizures were for counterfeit goods that amounted to R44.1 million followed by narcotics, R378 000 and alcohol, R374 000.

Since April last year 24.3kg of narcotics valued at R30.2m were seized.

Sars spokesman, Luther Lebelo, said the new scanners – one was deployed in Cape Town Harbour in July – could show the difference between 40 different types of materials such aluminium, steel, plastic and organic.

The scanners are also able to detect if radioactive material is being smuggled and can see through up to 380mm of solid steel, making it very hard for smugglers to hide contraband.

“From a business perspective, if customs were to unpack suspicious containers, we could do three a day. We are now aiming to do 100 inspections a day on a highly targeted and non-intrusive basis. From start to finish, we can scan in under 12 minutes,” Lebelo said.

“This new system also helps increase audit-ability because it is now highly integrated and centrally available over the Sars network, customs has the ability to investigate cases, re-investigate cases, check for quality control, interrogate findings, and we can also tell who did what, which cannot be done at the moment. These are the big benefits,” he said.

Lebelo said that for every single scan that customs did, they opened a case, did the scan, verified the result, generated a marked-up image, and then managed the findings – in the case of a hit.

“The new, integrated scanning process also eliminates fraud, theft and bribery, because all actions are recorded as cases,” he said.

Durban is one of the busiest ports in Africa, handling more than 80 million tons of cargo a year.

A police source, who cannot be named, but has intimate knowledge of the port operation, said the position of the port and its network and trains and trucks made it a favourite for smugglers.

The source said that, unlike other ports of entry such as airports and border crossings, investigators had to rely on instinct and luck much of the time.

“Even with the new scanners they can only do a limited number of scans a day.

“Thousands of containers leave the port every week and you will not be able to check every one of them.

“That is the challenge we have. The scanners make it easier, but sometimes we are able to make busts just on pure instinct and experience from other busts,” the source said.