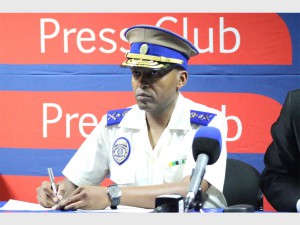 THE party is over: the new EMPD chief is serious about combating crime and keeping the citizens of Ekurhuleni safe.

THE new chief of Ekurhuleni Metro Police (EMPD) did not mince his words when he said: “The party is over.”

And with these four words, Bafana Andries Mahlabe has officially issued a warning to criminals in Ekurhuleni.

Ekurhuleni mayor, Clr Mondli Gungubele, introduced the new chief of the EMPD in Germiston on Thursday morning. The 46-year-old is taking over from Hlula Msimang, who left the post for the City of Johannesburg after completing his five-year term of office.

Boasting an impressive background in firearm training, engineering, military combat, tactics and intelligence, which he acquired in South Africa, Uganda and Bulgaria, he is a political activist who also spent time in exile. He served in the SANDF for some time before joining the National Intelligence Agency. Mahlabe also has formal education and holds a PR certificate from PRISA and a political science diploma.

Accepting his appointment, and showing gratitude for it, he addressed the media and has bravely given himself 100 days to prove he is indeed the right man for the job.

And it seems as though the new police chief is here to work, because after only 10 days in office, he can already boast some successes, having arrested three suspects linked to police killings, cash-in-transit heists and armed robberies in Vosloorus.

“I’m a man of action and I am very clear on the critical areas I need to focus on, namely illegal mining known as zama-zama, copper cable theft, scrap dealers and illegal activities such as theft of manhole covers. We want to make sure the city doesn’t lose revenue and the city does not spend unnecessarily by always replacing such things,” said Mahlabe.

Mahlabe especially emphasised the issue of drug peddling, especially within CBD areas. “We want to clean the CBDs, because these are havens for prostitution, drug dealings, human trafficking and many other related crimes. And for those who have been busy with these crimes in these areas, the party is over,” he warned.

Land grabbing, hijackings, violent crimes, service delivery protests, traffic control and by-law enforcement will also be tackled. The chief will also implement a festive season strategy where past statistics have shown crime increases during these times.

The chief of police’s 10-point plan of action for the city is:

2. Transformation and professionalisation among members of the metro police department

3. Depoliticise the department through separating

6. Visible/active policing (with the chief stating he himself will be out on the streets with his officers and not nestling up in his office)

• And by implementing all the above, to help makethe  EMPD a world class entity

Mahlabe’s appointment has not been without scrutiny from media and disapproval by the Democratic Alliance.

The day before the big announcement, the DA’s Michele Clarke, MPL DA Gauteng spokesperson on community safety and councillor Mary Goby, DA Ekurhuleni shadow MMC for community safety, issued a statement, questioning the eligibility of his appointment and also claiming that Mahlabe had “a record of violence”.

According to the statement, Mahlabe’s appointment is not up to scratch because he is not an EMPD member.

Gungubele quickly made it clear that while Mahlabe is not a member of the EMPD, the city is following all necessary processes as defined in the Police Act to ensure his appointment is in accordance with the law.

The chief was not fazed though, ending his speech by cautioning criminals they better surrender, because his 100 days start now with the launch of “Operation Bumper to Bumper”.

“I’m taking back the streets to the citizens of Ekurhuleni and will leave no stone unturned. And to those who supply and smoke nyaope and are killing the future of this country, we will be cleaning all the shops, houses and corners known as nyaope hangouts. The only way to avoid us is by being in a rehabilitation centre, at school or at work. Operation Bumper to Bumper starts now!”