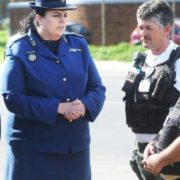 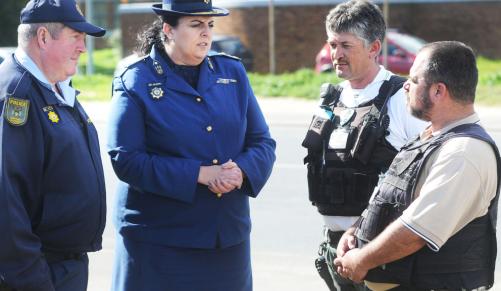 A month ago, armed robberies, vigilante attacks and hijackings were a common occurrence in the roads leading to the train station.

These crime-related incidents have now been brought down by 100 percent, with no incidents reported since Van Niekerk’s crime-fighting approach was implemented.

On an average day, at least nine police patrol vehicles are utilised to keep the peace, and with swift intervention from a network of well-placed role players, crime was successfully prevented in the last 30 days.

“We have, since a month ago, been the sector with the most robberies, street robberies which mostly take place in the communities with people walking to and from work. This is when we realised we needed to do something,” said Van Niekerk.

She approached nine security companies for help – Baron, Gabar, Capital, SJC, Landri, ADT, District Bassett, Chubb and Securitas Security – who were safeguarding businesses along the main roads leading to the train station, but were not co-ordinating efforts.

The Community Policing Forum (CPF) sent out invitations to the nine security companies to attend a meeting at the police station to discuss a way forward.

A WhatsApp group was formulated shortly after and Joint Operation Kraaifontein was born.

Agrimark and Shell garages, who were regular targets and in the centre of the hot-spot areas, supplied free coffee to those who patrolled.

“The security companies never criticised us or refused to drive into an area that was considered dangerous. People going to work is what is the most important to protect because they are going to work to forge a better life.

“We caught a robber on camera on the N1 and with a description we posted on the WhatsApp group and, with assistance from the role-players, he was apprehended.”

However, Van Niekerk noted some of the criminals were being driven to other parts of the area.

“We are looking to remedy that situation,” she said.

CPF chairman Sila Mawethu has been obtaining information from residents in areas spread out around the Kraaifontein area, which has also helped with police intelligence and crime-prevention.

“Our efforts are helping a lot. Residents are patrolling in the area. Some of them early in the morning and during peak hours in the evening, are walking and driving around looking for suspicious looking people,” he said.

The CPF is also in the process of creating a network of neighbourhood watches in the different sectors plagued by certain criminal elements.

“The CPF is the community representatives to police and we are doing all we can to help,” said Mawethu.

“Communities are the eyes and ears in terms of what is happening. Some of the things are happening in areas where police can’t reach so we provide information,” he said.

“From our side, our workers are standing together and it’s making a huge difference.

“We know our business is safe. We are glad we are able to help,” said Hendricks.

“We were working as a joint area to bring down the crime to help all the businesses previously affected,” he said.

Residents who want to join Joint Operation Kraaifontein, can contact kraaifontein-SAPS@saps.org.za or call 021 980 5533.