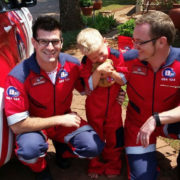 Little Aidan (7), became the youngest “member” of Team Red. Aidan, dressed in his red ER24 superhero flight suit, took his first official ride in an ambulance.
With the help of the sirens blaring and the lights flashing, Aidan, in the company of his ER24 “colleagues” and family, bravely reported for duty at the Mediclinic Morningside.
Aidan, who lives in Bryanston, was diagnosed with a rare genetic disorder called Costello Syndrome when he was 18 months old. The syndrome is so rare that he is only the second diagnosis in South Africa. He is one of only a few hundred people worldwide who has been diagnosed.
Costello Syndrome affects various parts of the body. In Aidan’s case, he has to undergo abdominal scans every three months to screen for cancerous tumours. He also has to undergo heart scans as he has a thickened left ventricle wall.