The K9-Narcotics Unit will focus on drug-related crimes in crime hotspots during the first 100 days after its launch.

A specialised K9-Narcotics Unit in the Johannesburg metro police is aimed at waging the war on drugs in the city.

According to the City’s executive mayor, Herman Mashaba, the dedicated canine unit would strengthen the City’s ability to act against traffickers and drug peddlers. He said the City would also put in place drug prevention and treatment programmes and work closely with communities through awareness and education.

The K9-Narcotics unit at the Johannesburg metro police’s training academy in Selby launched on Monday with Mashaba in attendance. He said: “For years our city has been plagued by crime and drugs. Lives have been lost, families have been broken, communities torn apart and people left brokenhearted and hopeless.

“As a parent, I have had enough of how drugs are destroying the lives of many of our young people. Communities have had enough, and the City cannot ignore their plight.”

The launch of the unit comes after Mashaba had said on May 30 that if he was elected as Mayor, he would create a specialised drug unit within the Johannesburg metro police.

The Johannesburg metro police looked at the best performing officers with the highest level of integrity to fill this K9-Narcotics Unit. The unit will also be capacitated with high-calibre firearms and high-performance vehicles.

A further 19 dogs have been purchased and currently undergoing intensive training and assessment in explosive and narcotics detection. The K9-Narcotics Unit will focus on drug-related crimes in hotspot areas during the first 100 days after its launch.

“Today, we declare war on drugs and the druglords. There will be no safe haven for druglords in Johannesburg,” said Mashaba.

Noting that drugs are often linked with a variety of social, psychological, financial and health issues, Mashaba said he could ignore a profound truth that lies beneath the surface. “More than any other problem, the drugs epidemic is representative of our city’s deep social divide,” he said.

Research shows that drug users with low socioeconomic status are susceptible to substance abuse as a way of coping and escaping the harsh realities emanating from unemployment and a poor background. “While I realise that drug abuse cannot be reduced to a single factor, unemployment is a significant contributor,” stated Mashaba.

Mayor Mashaba noted that a focus on job creation and proactive antidrug strategies would help our residents to realise their full potential. “As government, we must create an enabling environment for businesses to flourish. In turn, they will make massive investments to create jobs and reduce the unemployment of over 800 000 of our residents,” said Mashaba.

Mashaba wished the new K9-Narcotics Unit success. “I have every confidence in your ability to achieve the goals we have set, and I look forward to regular updates on your achievements.” 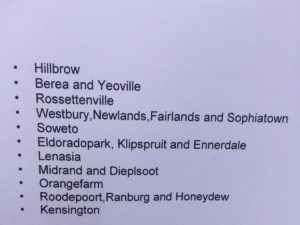