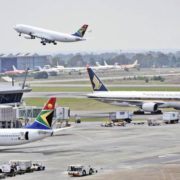 Lindi Masinga
Johannesburg – Three men alleged to be involved in the heist at the OR Tambo International Airport in March were granted bail – collectively amounting to R30 000 – by the Kempton Park Magistrate’s Court on Monday.Sibusiso Mnisi, Prince Dube and Thando Sonqishe are facing charges of robbery with aggravating circumstances for their alleged involvement in what is considered one of South Africa’s biggest heists.

Magistrate Amukelani Msineki granted Sibusiso Mnisi R50 000 bail and he has to report four times a week to the Kempton Park police station.

He is not allowed to leave Gauteng until the matter is finalised unless he gets permission by the investigating officer.

Earlier, the magistrate said that Mnisi’s defence council had to prove that there were exceptional circumstances that made him qualify for bail. She said that the state and defence had agreed that the charges he was facing fell under schedule five on the Criminal Procedure Act. Mnisi, 39, made his bail application on March 31. He told the court that he was a maintenance worker and earned R7 000.

In his affidavit Mnisi denied being involved in the heist and that there was no evidence linking him to the crime. He said that his admission statement was made under duress.

Investigating officer Colonel Mabina Mahlangu alleged that Mnisi supplied the cellphones that were used by the suspects to communicate. Mnisi said that he had no previous convictions and the state did not bring forward any information of previous misconduct.

Magistrate Msineki said that there was no reason to suspect that Mnisi had any previous convictions. She said the accused had strong emotional ties in South Africa as his family was based in the country. He has no passport to travel outside the country.

The state did not show this court how the applicant was involved,” Msineki said.

The magistrate granted Prince Dube R150 000 bail including conditions of reporting Monday to Friday and twice on weekends and that he had to surrender all his traveling documents. During judgement, Msineki said that Dube denied being involved in the heist and that there was no evidence linking him to the crime. In his affidavit dube said he earned R400 000 per month.

Later in court the accused said the amount was in fact his annual income.

The investigation officer found that Dube was not a documented citizen and that he was from Zimbabwe.

The accused has four previous convictions of which he only disclosed two. Mahlangu said the accused was most likely to evade trial and commit other crimes.

However, the magistrate said setting strict bail conditions could prevent Dube from evading trial. She said that the state had not given evidence or documents proving that Dube was a Zimbabwean or that he was illegally residing in South Africa.

“The identity number provided was used to find his previous convictions, it was used by SARS to find the various companies he owns.” Msineki said that the state’s case was doubted as Dube was merely linked by an admission statement.

“There’s nothing that links the accused to this case and that he was on the scene on commission of the offence. A SBV uniform was found in his possession, not a SAPS uniform.” Msineki said that the investigation officer said that the money found could be linked to the crime, but there was no evidence directly linking it to the heist.

Due to technical difficulties, the full judgment of Thando Sonqishe could not be read. The magistrate granted Thando Sonqishe bail of R100 000 and he has to report to the Midrand Police Station seven days a week and that he has to notify the investigating officer if he wished to leave the province. Court was adjourned to Tuesday.