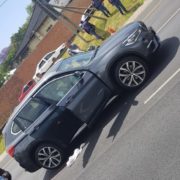 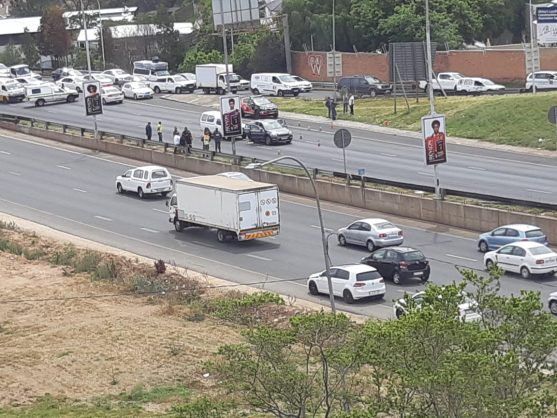 The police are on the lookout for five suspects who cornered off and shot at two people in a car on the M1 highway on Monday afternoon.

Eloise* was in her office that overlooks the highway when the incident unfolded. Instead of filming the incident as most witnesses did, she opened her Namola Safety App and requested assistance for the two victims.

“I heard shots from our office on the third floor and when I looked out the window I saw the vehicle and men grabbing a bag from a car,” says Eloise.

[LISTEN TO ELOISE CALL FOR HELP]
Namola Watch responders, Vision Tactical and Riga Rescue, were alerted to the incident and arrived on scene within four minutes of Eloise’s call. While the five suspects got away, the two patients were attended to on scene by Riga Rescue medics and later transported to hospital.

“We were the first responders on scene. Two victims, a driver and a passenger in the back seat had been shot and were in bad condition,” says a responder from Vision Tactical.

The responder continued to say that he thought the victims had been followed from the bank that they had been seen at earlier that day.

“We encourage all South Africans to have Namola on their phones for incidents like this,” says Peter Matthaei, CEO of Namola. “If Eloise hadn’t requested assistance, it may have been a different story for the two victims that were shot.”

*The Name of the witness has been changed to protect her identity.

🚧Road Closure🚧
M1 North Jan Smuts between the off and on-ramp closed due to criminal incident.@SAPoliceService on scene.@JMPD diverting traffic off the freeway at Jan Smuts Avenue and Empire road.

VISION TACTICAL part of the operations underway for none compliance & property...
Scroll to top