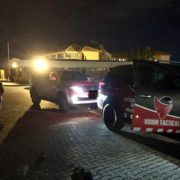 In a joint crime prevention operation, The Johannesburg Metro Police Department K-9 Unit together with Vision Tactical and Tracker SA – recovered a number of stolen vehicles over the weekend in Johannesburg.

However, there were no suspects who were apprehended in the operation.

The vehicle was reportedly hijacked in Braamfontein with a 5 year old child inside.

The car was recovered at Princes Place in Parktown and the child was returned safely to the parents.

Great job done by our JMPD K9 officers who recovered a Hijacked Silver Audi A3.The vehicle was hijacked in…

Practical Tips To Protect Your Valuables During Load Shedding