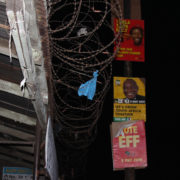 Vision Tactical’s ‘Green Team’ has made an urgent plea to all political parties to ensure that their election posters are removed across the city in order to prevent a possible litter frenzy.

With thousands of posters still up on light-poles, along bridges and walls across the city, what happens next?

The City of Joburg’s Managers office confirmed to VTac Media that political parties are required to remove posters within 14 days’ (post) elections.

“For the sake of restoring an aesthetic appeal to all communities across South Africa I hope that political parties remove the thousands of posters with the SAME energy they used to put it up.”

At the same time, the Johannesburg Metro Police Department (JMPD) said they will be overseeing and monitoring the removal of election posters by various political parties.

Superintendent Wayne Minnaar told VTac Media that they are now awaiting further information from the City of Joburg with regards to the process and protocols of the operation.

The Green Team forms part of Vision Tactical’s environmental and humanitarian effort to give back to the community.

Simple, Yet Effective Ways to Make Your Home Safer
Scroll to top