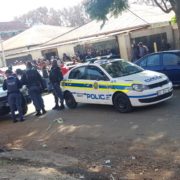 An armed male was shot dead in Hillbrow on Monday afternoon after shooting live rounds of ammunition in to the air after a funeral.

South African Police Service (SAPS) officials ordered the man to lay his weapon down on the ground, however he refused and started shooting at the officers on duty.

The man was subsequently shot by police officials and declared dead on scene by attending paramedics.

SAPS and other officials are still on scene to monitor the situation as reports of violent attacks of police started to emerge in the area.

Vision Tactical responded to a shooting incident in Hillbrow, where an armed suspect shot in to the air after a funeral procession, SAPS officers tried to disarm the assailant when he started shooting at them, the suspect was subsequently shot dead on scene. pic.twitter.com/5WgIfpRf72