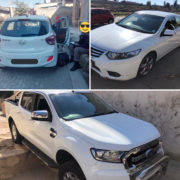 In the first incident, three suspects were apprehended in Bez Valley for possession of a sought motor vehicle after a business robbery occurred in Kempton Park on Monday morning.

Units received information that a Ford Ranger 3.2 was reportedly stolen in the robbery.

Upon arrival, response team members found the three suspects at the vehicle and an operational plan was executed which led to the premises being raided.

All three suspects were arrested and are detained at the Jeppe police station.

In the second incident, A Hyundai i10 was recovered in the heart of Alexandra after it was hijacked in Soweto, the victim was reported to have still been inside the vehicle.

The vehicle was pulled over by officers and the suspect was apprehended on the scene.

A case has been opened at the Alex police station where the suspect has also been detained.

The victim was found safe at the Alex police station.

In the third incident, a cloned Honda Accord was recovered by Vision Tactical Intervention units, JMPD and Tracker SA. The car was spotted on the N12S and pulled off.

All recovered vehicles were booked at SAPS Pound for safe keeping.

South Africa’s Bitterly Cold Winter Brings Fire Along With It…