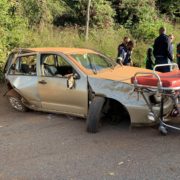 A woman succumbed to her injuries after a horrific crash on the M1 Highway on Tuesday afternoon.

Vision Tactical and other emergency service officials attended to the crash scene.

Upon arrival they found a woman who sustained serious bodily injuries, paramedics attempted to resuscitate the woman but unfortunately, she was declared dead on scene.

Other patients sustained minor injuries and were transported to various hospitals for further treatment.

Serious MVA on the M1 before Houghton, one patient seriously injured, medics trying to resuscitate on scene.