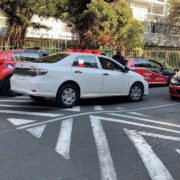 Over the past weekend, Vision Tactical units were deployed in various areas to ensure the safety and security of all.

With the recent spike of street crime incidents in the North of Johannesburg, Vision Tactical units strategically set out to clamp down on suspected criminals operating in the area of Killarney and surrounds.

#CrimePrevention Operation in Killarney on Saturday, 8 additional units were deployed to the area due to the increase of street crime incidents over the past few weeks.

Awaiting @JoburgMPD and @SAPoliceService to verify a suspected hijacked vehicle with possible cloned plates intercepted in Killarney by Vision Tactical units on a #CrimePrevention operation. pic.twitter.com/FonPBN9F1c

On Friday, Vision Tactical units were called to assist ER24 Paramedics responding to an emergency situation in Alexandra, following intense protest action in the area after close to eighty – illegal homes were destroyed by the Red Ants.

Vision Tactical intervention and tracking units assisted Tracker SA in apprehending 8 suspects linked to hijackings and being in possession of illegal firearms on Saturday night.