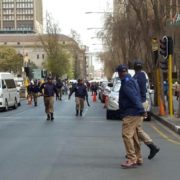 Police were pelted with rocks and other objects after a raid to seize counterfeit goods in the Johannesburg inner city on Sunday.

“While no law enforcement members sustained injuries‚ an unconfirmed number of police vehicles were damaged and barriers set alight.

“Police will remain on the scene to ensure that no further violence erupts.”

“We cannot allow such lawlessness to go unpunished.”

Vision Tactical units remain on high alert following a volatile few days in the inner city center, all intervention units are mobile and standing off across the city to assist police officials.