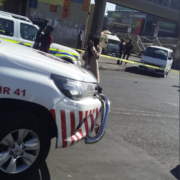 Police spokesperson Colonel Athlenda Mathe told News24 that the bystanders were accosted by a group of men who began shooting randomly.

“Unfortunately, two innocent bystanders were shot and injured. They were treated at the scene and taken to a nearby hospital.”

ER24 spokesperson Russell Meiring said in a statement that it arrived on scene to find a 42-year-old man, lying on the pavement next to a taxi.

“Medics assessed the man and found that he had sustained a gunshot wound to his upper leg, leaving him in a serious condition.”

The man received treatment on the scene and was transported to a nearby hospital for further medical care.

Police are investigating a case of armed robbery following the incident, which occurred near the Bara taxi rank as security guards were loading cash into an ATM.

The culprits left the scene with an undisclosed amount of money, Mathe added.

Driving Home The Message Of Road Safety This Holiday Season

How Many More Taxi Related Incidents Before Any Action Is Taken? @ The Minister...
Scroll to top