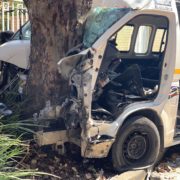 The minibus taxi industry forms the most critical pillar of the South African public transport sector.

Not only is it the most available mode of transport, it is also the most affordable to the public.

The taxi industry plays an important role in the economy, considering that the majority of the population is poor and depend on public transport.

Taxis are often seen as unsafe and violate road rules and recently there have been concerns raised by residents due to the increase of road crashes involving minibus taxis.

According to Arrive Alive, about 150,000 taxis are on our roads, and about three of every 36 people who die on our roads daily are killed in taxi-related incidents.

The minister said passengers must refuse to let drivers overload their vehicles.

“This should be an example to all of us in terms of obeying the law on our roads.”

Vision Tactical secures accident scenes on a daily basis and almost every day the team witnesses either one or more taxis involved in the accident.

The accident scene from earlier this morning involving another taxi full of passengers.

Patients were transported to nearby medical facilities by paramedics and EMS personnel on scene. pic.twitter.com/FVdHcIsfQ5