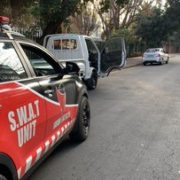 The vehicle was reportedly stolen in Illovo, north of Johannesburg and was found abandoned in Killarney.

Unfortunately no suspects have been apprehended as yet.

The vehicle has been transported to the impound for safekeeping.

🙌🏼 Job well done to our S.W.A.T unit on recovering a Hyundai H100 this afternoon.

The vehicle was stolen in Illovo and recovered (abandoned) in Killarney.

❌ No suspects apprehended as yet. pic.twitter.com/obkuRFAuAS