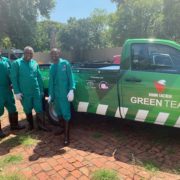 Security Company Vision Tactical’s environmental initiative “the Green Team” engages in cleanup operations around the areas of Houghton, Killarney, Norwood and Rosebank – making it one of the largest community-based environmental campaigns in Johannesburg.

Community groups, schools, businesses, and local governments are able to join the team as volunteers and assist the Green Team in carrying out activities that address local environmental issues.

By facilitating local action, the Green Team brings about much needed environmental change.

However, even good initiatives require assistance.

This is where residents can play their part in a much bigger way and become active citizens.

Since the Green Team was formed, over 20 000 bags have been used to collect rubbish around various areas.

The Green Team was established in 2019 as a non-profit, non-government apolitical initiative that unites communities with a common focus to protect the environment.

The team’s footprint might be small, but the mandate is to empower people in communities all over Johannesburg to make a difference to their local environment.

The team collates and shares experiences on various social media platforms so that others can be inspired to take action.

Vision Tactical’s Green Team supports any type of activity which raises awareness, improves the local environment or contributes to solving of an environmental problem and hopes that others will be inspired to do the same.

The Green Team initiative has been put into motion as a result of an incredible collaboration with Freeway Toyota, the Nelson Mandela Foundation, ER24, AL’s Hardware among others – and is associated with the Lower Houghton Residents Association and the Killarney Residents Association.

The Green Team – Keeping it clean…

How Many More Taxi Related Incidents Before Any Action Is Taken? @ The Minister...