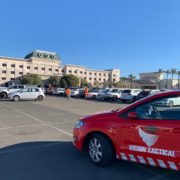 The event highlighted the growth of the private security industry across the globe, with a deeper focus on South Africa.

Police Minister Bheki Cele delivered the keynote address, emphasizing the need for the South African Police Service and private security companies to bridge the gap with each other in order to ensure South Africa becomes a safer place.

The Private Security Industry in 🇿🇦 is one of the fastest growing in the world, Police Min Bheki Cele has called on the the sector to collaborate with the Police Service and Metros.

VTAC is proud to be engaged with the JMPD and SAPS on various #CrimePreventionOps pic.twitter.com/yCl9tZ0QdY

It’s Time For All To Reflect Upon What Can Be Done Beyond #67Minutes for ...
Scroll to top