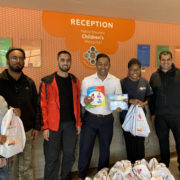 Nelson Mandela International Day has enjoyed 10 years of global support and solidarity since it was launched in 2009.

This year the Nelson Mandela Foundation has launched a new Mandela Day strategy, titled: Mandela Day: The Next Chapter, to mark the tenth anniversary of the initiative.

In the next 10 years, the foundation hopes to mobilise people, governments, civil society and corporates to focus on these 5 areas: education and literacy, food and nutrition, shelter, sanitation and active citizenship.

The Nelson Mandela Foundation’s Sello Hatang has called on people to reflect on what could be done beyond 67 minutes.

“We want them to focus their minds on what needs to be done in the future and that it’s not enough for the rich and privileged to come out just for a day and then they feel good and leave those who still need to fend for themselves.”

Members of Vision Tactical at the Nelson Mandela Children’s Hospital @_NMCH_ , the first hospital stop of the day.

The team dropped off much needed items including stationery and sanitary packs for kids! #67minutes #MandelaDay2019 #MandelaDay pic.twitter.com/cQAtUEQ25s

Vision Tactical strives to make everyday a Mandela Day by not only protecting our communities, but in giving back in more ways than one, and the Green team is one such initiative.

In giving back to the community on a daily basis, the Green Team hopes to inspire fellow South Africans to keep the environment in its cleanest and most natural state.

The Green Team’s vision and mandate is to ensure everyday is #MandelaDay ✊ #KeepingItClean around Norwood, Houghton and surrounds today, while lending a hand at various schools in the area. ♻️🇿🇦#MandelaDay #67minutes pic.twitter.com/UhIbO7Vyom

Founder Yaseen Theba says all South Africans need to come together, join hands and assist in helping those who need it most.

“We need to have a plan of action to ensure Madiba’s legacy is carried through future generations, this will ensure that the vision Madiba had for his beloved country can be realized.”

Theba adds that Madiba Day is celebrated to remind each and every person of the possibilities which exist when people unite.