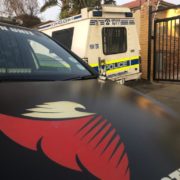 A suspected home intruder managed to escape from another security company on Tuesday morning in Orange Grove.

The handcuffed suspect ran away after being told “not to move”.

Vision Tactical Intervention Units responded to the scene trying to locate the suspect who escaped – when eye witnesses confirmed that the assailant ran in the direction of Louis Botha, central Johannesburg.

Unfortunately, the suspect got away and is currently on the run.

The South African Police Service (SAPS) and relevant authorities were on scene.

Community Participation In The Fight Against Crime Can Save Lives