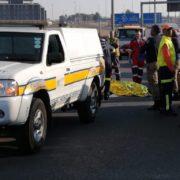 A 10th person has died in hospital following a crash on the N1 South near the Buccleuch Interchange, in Johannesburg on Sunday afternoon.

Nine other people died on the scene.

Four people were injured and transported to a hospital.

“Because of the impact…the taxi collided with the concrete barricade. One of the passengers was ejected from the taxi and was flung on to the northern side of the N1 freeway.”

A taxi driver is believed to have lost control of his vehicle before it hit into the concrete barricade.

Minnaar said traffic is still heavy on both sides and urged motorists to be cautious.

Fatal Accident involving a minibus taxi on the N1 south at the Buccleuch I/C. 9 people certified dead. Traffic is is heavy in both directions heading towards the scene. Please excercise extreme caution when approaching. #JHBTraffic pic.twitter.com/R6CgGPjgOJ

Back in June,  Vision Tactical posed this to the Minister of Transport…

⚠️ How Many More Taxi – Related Incidents Before Any Action Is Taken? @ The Minister of Transport @MbalulaFikile

Apartment Safety 101: Tips from Vision Tactical to Keep You & Your Apartment...