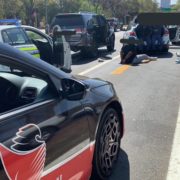 Vision Tactical Intervention and Tracking Units together with the newly launched Mobile Command Centre were mobile across the City of Johannesburg over the past weekend.

An intense Crime Prevention Operation was conducted in various areas across the city to clamp down on criminal activity.

Passengers tried to dump alcohol before reaction officers apprehended them.

On Sunday, Vision Tactical’s Tracking Units together with the SAPS and Tracker Connect recovered a sought Toyota Fortuner, whilst at the same time apprehending two suspects.

Vision Tactical Intervention and Tracking Units together with Tracker Connect and SAPS officials managed to recover a sought Toyota Fortuner in Pretoria! 2 suspects were arrested in the process!
_
Job well done to all Units involved! pic.twitter.com/l37dWI6Cfa