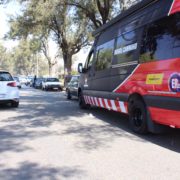 Concern has been raised with regards to crimes involving fire-arms which have significantly increased the level of violence associated with crime, thereby increasing physical and psychological costs of crime to society.

Two suspects arrested, while a number of cars were stop/searched. pic.twitter.com/Nks8tVCcud

VTAC Tracking and Intervention Units also recovered an abandoned Toyota Hilux in the Johannesburg CBD by Vision Tactical’s together with SAPS highway patrol and Tracker Connect.

Abandoned Toyota Hilux recovered in the Johannesburg CBD by Vision Tactical’s Tracking and Intervention Units together with SAPS highway patrol and @Tracker_SA, the vehicle was stolen this morning and interior found stripped.

No suspects apprehended as yet. pic.twitter.com/SJW9L0iYr8