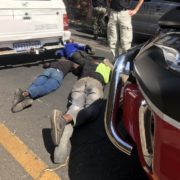 Analytical cameras in the area monitored the chase remotely and dispatched additional Intervention Units to the scene immediately.

Stolen batteries were found in the suspects’ car together with tools used by criminals in house break-ins.

Johannesburg Metro Police Department officials arrested the four suspects and took them to Hillbrow Police Station where they will be held in police custody.

Swift action by Vision Tactical’s Intervention Units led to the apprehension of suspected battery thieves operating in Houghton and surrounds.