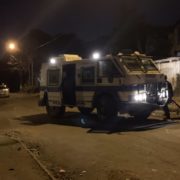 Six suspects were arrested on Tuesday night for looting a student’s residence in Jeppestown.

It’s believed that the suspects lived next door, and were the actual neighbors of the students.

Meanwhile, EWN is reporting that Jeppestown residents have criticised Police Minister Bheki Cele for not coming up with a solution to their concerns about foreign nationals and drugs.