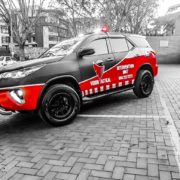 On Friday the 15th of November, Vision Tactical were called for assistance after reports of a hijacking incident turned in to a kidnapping case involving four students.

Together with Crime Stop and the South African Police Service, the team managed to trace the victim’s location.

The young men were found safe near the Koppies in Kensington while the hijacked vehicle was recovered in Troyeville.

Listen to the full interview with the Director of Vision Tactical Yaseen Theba:

Important Road Safety Tips Cyclists Can Make Use Of Ahead of the 947 Ride Joburg...

Be Considerate, Responsible and Vigilant This Festive Season
Scroll to top