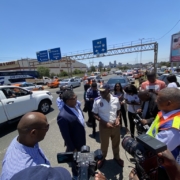 “There is nowhere to run, illegal drivers, unroadworthy vehicles, remember that you are all surrounded, so don’t drink and drive, and let’s arrive alive.”

Mbalula adds that the JMPD is leading from the front.

“As the Minister of Transport I am very happy and elated by the efforts of our police officers and the council of Johannesburg for the investment in law enforcement.”

“This will happen through effective law enforcement and visible policing to encourage motorists to obey road rules, and in this way, reduce road fatalities this festive season.”

“More than 1,600 people died on the country’s roads during last year’s December holidays, this statistic is alarming and of great concern.”

Theba adds that Vision Tactical will deploy additional Intervention, S.W.A.T and Tactical Response Unit vehicles on roads during the festive period to assist law enforcement when there is a need.

Minister of Transport @MbalulaFikile assessing an unroadworthy taxi that was operating in the @CityofJoburgZA , the taxi driver was stopped by @JoburgMPD officers during the launch of the #FestiveSeasonSafetyCampaign pic.twitter.com/WKSZ0uIaSg

Vision Tactical Director Yaseen Theba addressing traffic ⚠️ concerns in the Amalgam area with Superintendent Wayne Minnaar at the launch of the #FestiveSeasonSafetyCampaign on the M2 Highway.
_@JoburgMPD pic.twitter.com/bCyPMwqBth

Keep Your Home Safe and Secure During the Holidays – Vision Tactical Director...
Scroll to top