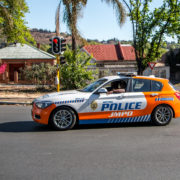 JMPD Spokesperson Superintendant Wayne Minnaar told Vision Tactical that the relationship is vital in combatting crime within the City of Johannesburg.

“It helps us be there where we do not have officers, so with the security guards they alert and assist and even apprehend criminals where there are no JMPD officers.”

Minnaar has urged those staying in the City of Johannesburg during the festive period to be extra vigilant.

“There is a tendency for an increase in crimes, particularly bag snatching, cellphone theft and that’s why we want to encourage people to carry as little cash as possible with them because it’s the time of year when criminals take advantage of the situation.”

Minnaar adds that all citizens should enjoy themselves, but within the parameters of the law.

“They should do so in a safe manner, and ensure that their safety is the number one priority.”

Vision Tactical Director Yaseen Theba addressing traffic ⚠️ concerns in the Amalgam area with Superintendent Wayne Minnaar at the launch of the #FestiveSeasonSafetyCampaign on the M2 Highway.
_@JoburgMPD pic.twitter.com/bCyPMwqBth

Steps To Be Taken To Address Traffic Concerns In Amalgam, Fordsburg Area