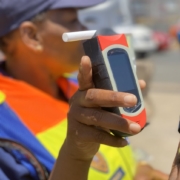 As holidaymakers head to their destinations, Transport Minister Fikile Mbalula and Johannesburg Metropolitan Police Department’s (JMPD) have vowed to clamp down on lawlessness on our country’s roads this festive season.

South Africa has one of the highest number of road fatalities in the world, with the majority of deaths taking place over the festive season. A total of 1612 people died between December1, 2018 and January 8, 2019.

Mbalula said the carnage on the the country’s roads was a crisis that demanded that the public think differently and act with singular resolve. Mbalula urged law enforcement authorities to up their game and ensure visibility and enforcement around the clock.

“Road users have an obligation to ensure vigilance and behave in a manner that does not place others in harm’s way at all times.”

The Gauteng Department of Community Safety is concerned about the increase of drivers who are arrested while under the influence of alcohol on Gauteng roads.

This follows the arrest of more than 140 drivers found driving under the influence of alcohol over the past long weekend.

Driving under the influence of alcohol and other prohibited substances often results in impaired driving causing unnecessary accidents and loss of lives.

The department advised motorists, particularly public transport operators, to comply with the rules of the road during this festive season.

Over the long weekend, 11 people lost their lives due to fatal crashes.

The long weekend was characterised by high traffic volumes as many citizens embarked on their journey to various holiday destinations.

Meanwhile, Private Security Company Vision Tactical deployed additional units on the ground to ensure the safety and security of clients businesses and residential properties during the festive period.

The company’s Director Yaseen Theba says that all Units will be mobile during the period to assist law enforcement when needed.

“The fight against crime requires a multifaceted approach and collaboration is the key.”