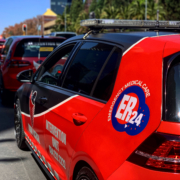 Vision Tactical Intervention Units responded to Killarney after receiving multiple panics from our guards on duty and reports that 3 bravo male suspects were stealing phones in the area.

The suspects stole a phone and attempted to escape on foot, however all three suspects were apprehended by our reaction officers and intervention units who were strategically deployed to the area.

Suspects handed over the SAPS for further processing.

How You Can Turn The Tide On Crime in South Africa