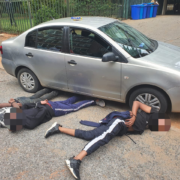 Communications Manager for the company Mohamed Ameen Dabhelia said, “Our guards who are stationed in Killarney pressed multiple panic [buttons] when they witnessed a robbery in the area. Our supervising armed response officers responded to the call and our Intervention Units swiftly attended to the area.”

Dabhelia added that three suspects stole a cell phone and attempted to get away on foot, however, two of the company’s Tactical Officers were already on scene and they swiftly apprehended the suspects.

Dabhelia said that the Private Security company received reports that the same suspects were using the exact same vehicle in Parktown and surrounding areas to commit crimes as well.

Sergeant Nduduzo Zondo from Hillbrow Police Station was unavailable for comment at the time of publishing. The story will be updated once more information becomes available.

JMPD have publicly requested victims that might recognize the suspects or the vehcile in other incidents to please contact Hillbrow detectives with their case numbers.

Celebrate Valentine’s Day With Your Loved Ones, Safely
Scroll to top