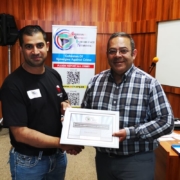 The gathering took place at the South African National Museum of Military History in Johannesburg on Saturday.

The CCIN’s Dr Reza Patel thanked Vision Tactical for its endless and sterling contributions toward the collective efforts of crime fighting & community development.

“We value & appreciate your contributions & participation, the CCIN proves that there’s always gains in working together.”

Director of Vision Tactical Yaseen Theba says that the entire team is honored to have received the award, but the fight against crime needs more partnerships & collaboration.

“Members of the CCIN are moving in the right direction. JMPD Chief David Tembe’s commitment to stronger relationships to create a multifaceted approach is already showing positive results in the City of Joburg.”

The Civilian Crime Intelligence Networks “Security Company of the year” awarded to Vision Tactical! 😎
_
Well done to the entire team, it’s a satisfying feeling knowing that the tireless efforts in the fight against crime and lawlessness is recognized!
_#ProtectingCommunities pic.twitter.com/rjS3pfEORE