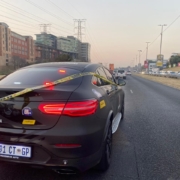 Information was received of a group of suspects that will commit armed robberies and other crimes in the Johannesburg area.

Information was that the suspects will be armed and will utilize a Kia Rio with registration number ## ## ## ##, to commit the crimes.

Members were placed into strategic positions on the lookout for the vehicle. Members then spotted the suspect vehicle driving direction on the M1 direction to Sandton.

[ On Scene 🔴⚪️⚫️ ]
_
Vision Tactical Units standing off at an active crime scene on the M1, just off Melrose.
_
Traffic building up, motorists to use alternative routes where possible. pic.twitter.com/GZSCbuuses

Firearms were found and other exhibits.

The Kia Rio was fitted with false registration and established to be sought as per Sandringham CAS. (robbed from owner)

Investigation will continue as these suspects can be linked to many armed robberies & hijackings in the greater Johannesburg area.

All necessary role players were contacted.

LCRC processed the scene for evidence and exhibits found.

The vehicle was taken to the saps pound for safeguarding. The suspect detained at the designated police station.