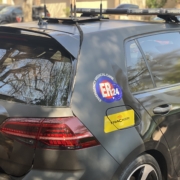 The smart camera technology supplied by NAVIC (National Vehicle Intelligence Cloud) read number plates of vehicles driving through areas and automatically references it to a database of case-registered vehicles, flagging any cars that would’ve been reported as stolen, hijacked or wanted.

Director of Vision Tactical, Yaseen Theba says that the integration of License Plate Recognition (LPR) cameras through the NAVIC system has already resulted in major successes in the prevention of crime and the apprehension of criminals.

“The overview cameras use Artificial Intelligence (AI) software to flag any unusual behavior, while the LPR cameras generate alerts sent on any vehicles which may be linked to a crime.”

Theba says that if confirmed positive the system instantly circulates an alert notification to the Intervention Units equipped with the system. The seamless speed of the process enables tactical security officers to respond swiftly.

License Plate Recognition (ANPR) cameras have proven to be a highly valuable crime fighting tool, leading to the arrest of dangerous, wanted criminals and the identification and recovery of hijacked and stolen vehicles.

The integration of this high-end system adds an additional layer of security to the community, taking a proactive stance against crime sending a strong message that criminal activity won’t be tolerated.

While Nothing Can Completely Eliminate The Risk of Kidnapping, There Are